We’ve long had a fascination with measuring time. It schedules when we work and when we relax. It tells us what days we have off, and counts the years between celebrations of our birthdays and anniversaries.

Allan Symons is one man dedicated to preserving Canada’s part in that fascination of measuring time and the world around us. Symons, the founder and curator of the Canadian Clock Museum, broke ground in Deep River, Ontario in 2000 as retirement project to showcase Canadian-made clocks from the 1800s to the present day.

The Canadian Clock Museum, fast approaching its 10,000th visitor and boasting over 2,000 individual items, has been featured as a North & Eastern Ontario Hot Spot in the CAA’s member magazine. The museum offers guided tours of historical horological artifacts, with major collections from The Arthur Pequegnat Clock Company, Westclox Canada, and Snider.

The Canadian Clock Museum on CFRA #1

The Canadian Clock Museum on CFRA #2

Other items in the collection include a diverse collection of clocks from other companies, both old and modern, as well as the tools with which watchmakers and clockmakers would ply their trade; a single donation in 2001 expanded the tool collection by over 100 items.

Accompanying these horological collections are archives that contain records of every Canadian and American clock and watch company, as well as authentic period artifacts such as Edison and Columbia phonographs playing anything from cylinder to flat records.

The museum, a charitable organization, is funded in part by grants, in part by Symons’ own funds, and in part by donations from visitors. Some of those donations are donations of materials, like tools passed on through the generations. 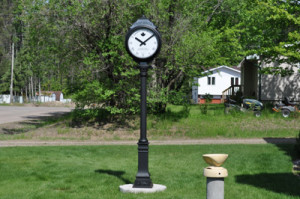 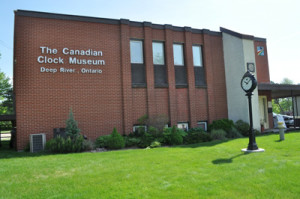 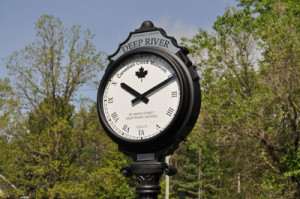 “The outdoor post clock is just the right addition to our front lawn,” says Symons. “It adds a nice historical touch. If you go back into the late 1800s, almost every community in North America had a street clock at some point.”

The clock will welcome visitors to the museum, and kickstart their journey into history. When that journey ends, that clock will be there to bid them goodbye—and bring that history full circle, as it reminds them that high-quality clock craftsmanship is as alive in Canada today as it was two centuries ago.